What is a Highly Sensitive Child? 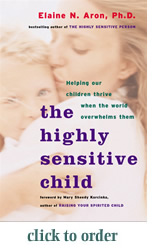 A highly sensitive child is one of the fifteen to twenty percent of children born with a nervous system that is highly aware and quick to react to everything. This makes them quick to grasp subtle changes, prefer to reflect deeply before acting, and generally behave conscientiously. They are also easily overwhelmed by high levels of stimulation, sudden changes, and the emotional distress of others. Because children are a blend of a number of temperament traits, some HSCs are fairly difficult–active, emotionally intense, demanding, and persistent–while others are calm, turned inward, and almost too easy to raise except when they are expected to join a group of children they do not know. But outspoken and fussy or reserved and obedient, all HSCs are sensitive to their emotional and physical environment.

So, what now?
First, appreciate that this is a wonderful trait. It is no illness or syndrome. Nor is it something new I made up or “just discovered.” It is an inborn temperament or style that is found in about twenty percent of children and of nearly all animals. Anything so persistent is not abnormal. It represents a strategy of taking everything into account before acting (the other, more common innate strategy is to act quickly and be first, then think later). The trait serves an important purpose for the individual sensitive person and for the larger society–for example, sensitive persons sense danger and see the consequences of an action before others do.

Unfortunately, the trait has been somewhat misunderstood in our culture, so that most psychologists and parents tend to see only one aspect of some sensitive children and call this trait shyness, inhibitedness, fearfulness, fussiness, or “hyper” sensitivity. If one could see inside the mind of a sensitive child, however, one would learn the whole story of what is going on–creativity, intuition, surprising wisdom, empathy for others…

But, for all of that to blossom, they absolutely must be raised with understanding. Otherwise, as adults they are prone to depression, anxiety, and shyness.

So, the second “what now” might be to read The Highly Sensitive Child. I wrote this book because so many adults were telling me that their childhoods were excruciatingly difficult, even when their parents had the best intentions, because no one knew how to raise them. Parents and teachers told them there were “too sensitive” or “too shy” or “too intense.” They tried to change and could not, and so felt increasingly isolated or ashamed. My hope is to spare some children such unnecessary suffering and the world the waste of so much talent, because HSCs have a tremendous amount to offer the world. But they do need special handling. They need to be appreciated, to have their special needs and sometimes intense reactions and behaviors understood, and, when correction is needed, they need to be handled with special care so that they do not become anxious or ashamed of their failure.

This book is rooted in years of my experience as a psychotherapist and consultant to HSPs and parents of HSCs, plus interviews with parents, teachers, and HSCs themselves for the book. Then there are my experiences from my fumbling efforts to raise an HSC before I knew what that was. And there’s what I know from having been an HSC myself.

Again, few parents and teachers understand this trait-–and as a result, HSCs are often mislabeled as “problem children” (and in some cases, misdiagnosed with disorders such as Attention Deficit Disorder). But raised with proper understanding and care, HSCs are no more prone to problems than nonsensitive children and can grow up to be happy, healthy, unusually well-adjusted and creative adults.

Chapters in The Highly Sensitive Child:

The rest of the book is on each stage of raising your sensitive child, with many practical tips as well as research findings on what really works with these particular children.

To Parents of School-aged children: You can give this book to your child’s teacher, especially the last section, “Tips for Teachers.”

NOTE: See Resources for Parents of HSPs for information on an independent online support group for parents of HSCs.

In this documentary, Art Aron (well-known love researcher) and Elaine Aron provide the science and advice behind the film Sensitive and in Love. Learn more about Sensitive Lovers here.

Click here to learn about the Foundation for The Study of Highly Sensitive People and how you can contribute.